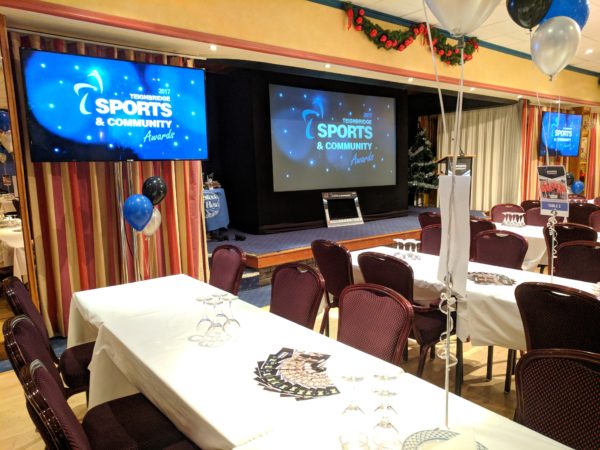 We were delighted to provide the Awards dinner audio visuals as well as sponsoring the Personal Achievement Award at the Teignbridge Community and Sports Awards 2017.

It was double joy for young Ethan Kirby as he picked up the title of Junior Sportsperson of the Year to sit proudly alongside his Personal Achievement award received earlier in the evening.

The Newton Abbot Athletic Club runner achieved a bronze medal at the world junior para athletics tournament this year and has aspirations to compete in the Olympics and Paralympics in Tokyo 2020.

Richard and Ethan were among a number of sporting stars celebrating success at the glittering awards night staged at the Langstone Cliff Hotel, Dawlish Warren, on Friday 1 December. The glittering awards ceremony recognises athletes, volunteers, sports teams, committee members, coaches and community champions who all go the extra mile to help keep Teignbridge active all year round.
The Teignbridge Sports and Community Awards 2017 saw prizes given across 12 different categories, representing the diversity of sporting talent and community spirit across the district. For the first time the People’s Champion was decided by an online vote leading up to and on the night of the awards, receiving over 4000 votes across all the nominees in contention.

Kitsons Solicitors was the headline sponsor for the fourth year running and many other well-known and established businesses sponsored categories. Other key partners were the Breeze FM, Mid-Devon Advertiser, Ripple Events, Pinnacle Photo Agency and radio and television presenter Ben Moseby.